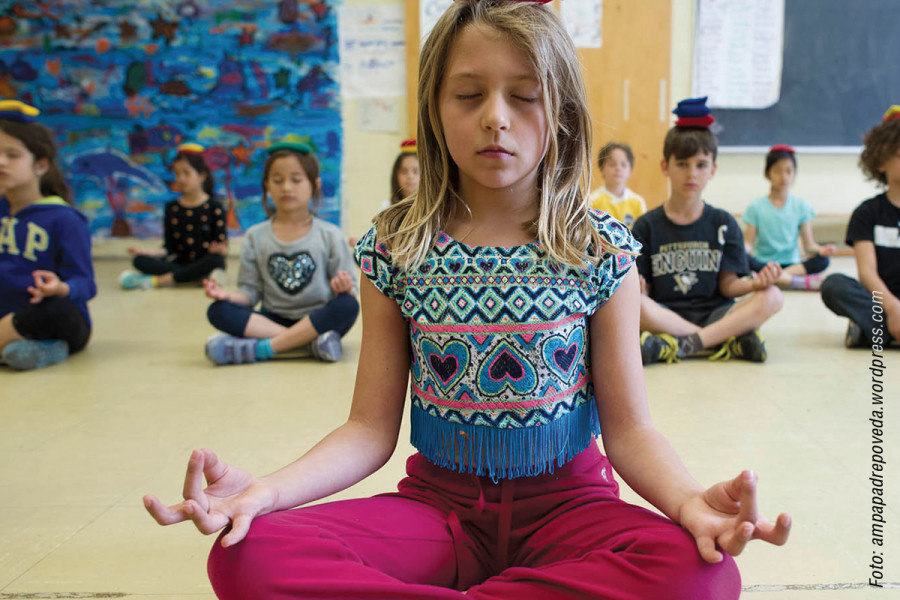 Bringing the peace of Mindfulness to young students.

I want to receive new articles by email
Meditation expands in schools
By Javier Alcaraz
A growing number of schools and colleges worldwide have started to introduce meditation to the classroom with techniques such as Transcendental and Mindfulness Meditation being practiced more and more. These practices are not linked to philosophical nor religious teachings, but are aimed at calming the mind. They bring many benefits to the students and teachers that use them: stress reduction, improved academic performance, better concentration, reinforcement of self-esteem and social skills. Over 340 scientific studies have confirmed the effectiveness of meditation in improving health and learning.

The Quiet Time program, sponsored by the David Lynch Foundation, has been promoting Transcendental Meditation in the schools of San Francisco and other US cities for a number of years. In these schools, meditation is practiced twice a day: when a special bell is rung the students know to close their eyes and concentrate for 15 minutes on a mantra or a recurrent sound. The foundation focuses on bringing meditation to schools where it is most needed – those which have a history of significant problems with violence and truancy.

Mindfulness is also springing up in the schools of many other countries, including the UK, Holland and Australia. This meditation technique brings your attention to the present moment so that you can observe your thoughts, emotions and physical sensations. Meditation is also being tried in a number of schools here in Spain. As reported in the Spanish newspaper El Mundo, there are already 200 schools in this country that incorporate mindfulness into their schedule. In one school, where 60% of families are of Roma origin and 35% are from migrant backgrounds, Mindfulness Meditation has become a regular part of the school day and the results have been spectacular. Statistics show that during the 2006/2007 school year about 30% of the children showed behavioural problems, but that figure had fallen to just 7% during 2013/2014. Truancy was also reduced by a staggering 70%.