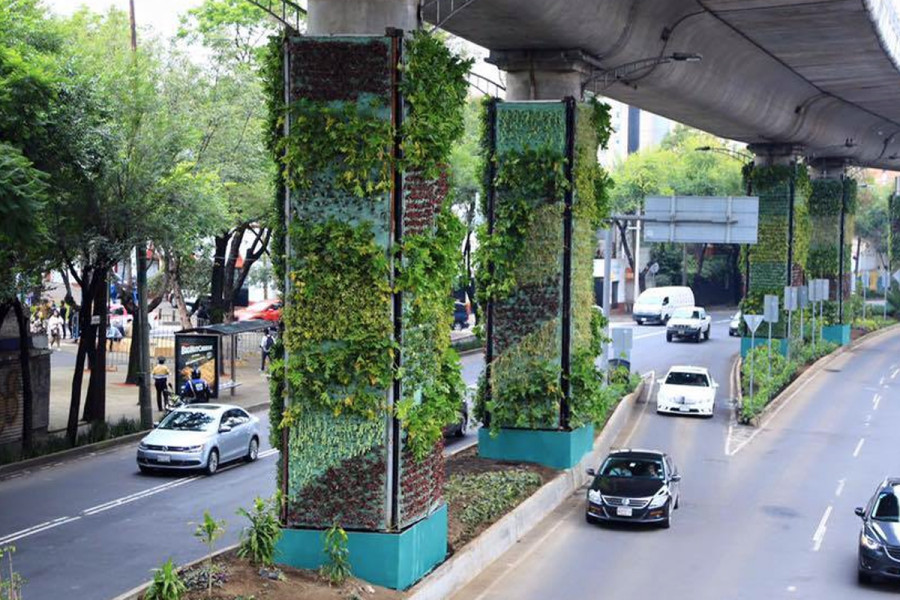 Using highways to bring more nature to the city.

I want to receive new articles by email
Vertical highway gardens in Mexico and India
By Jinny Throup
Innovative green projects have been launched in both Mexico and India which aim to improve air quality. In Mexico City the Via Verde initiative has over 40,000 square metres of vertical gardens on more than 700 columns of the city’s ring road. They project that each year this will filter over 27,000 tonnes of harmful gases, capture about 5,000 kg of suspended powders, and process more than 10,000 kg of heavy metals. These vertical plants will also add a significant amount of oxygen to the air. The system has automated irrigation to keep the plants healthy, and most of the water used comes from rain that is captured in specially designed containers.

The Via Verde project is a citizens’ initiative which is supported by many Mexican celebrities who invited the public to sign their petition at change.org. Its aim is to lessen the massive health problems that occur in Mexico City due to poor air quality and excessive pollution. It is hoped that the vertical gardens will not only generate multiple health and environmental benefits, but will also positively change the grimy image of one of Mexico City’s busiest roads.

Similarly, the Maha Metro in India is implementing plans to develop vertical gardens on the metro rail pillars in Puna - home to Osho’s famed Ashram. Recycled water will be used through drip irrigation and hydroponic technology to save water. These vertical gardens on the metro pillars are part of a greater overall effort by the city of Puna to combat pollution. The metro rails themselves help to reduce road traffic as they are a faster and cheaper way to commute. The city also has a bicycling sharing scheme in place whereby citizens can rent bikes near metro stations to help curb traffic. Adding these vertical gardens to the equation will further purify the air and reduce the harmful effects of pollution, whilst simultaneously enhancing the beauty of Puna’s roads.